I am interested in
?
The “Search” function is not available at the moment, please try again later.
Please get in contact with us. To contact form
Portal Home
Personal data
Personal data
Logout
Login Customer portal
Login BVGonline
Report a claim
About us
Working for Helvetia
Find an agency
EN
DE
FR
IT
Media releases
Group News
Financial information

The Helvetia Group increased its underlying earnings after tax in the first half of 2017 by 8% to CHF 258 million. The net combined ratio improved by 0.6 percentage points to 91.3%. The insurance group’s business volume grew by 0.3% (in original currency) to CHF 5,532 million. The result includes realised pre-tax synergies from the acquisitions of Nationale Suisse and Basler Austria of CHF 62 million. Clear progress has been made in the implementation of the helvetia 20.20 strategy, the aim of which is to make Helvetia more agile, innovative and customer-focused.
04.09.2017
The most important key figures for the first half of 2017 at a glance:

Additional key figures with comments are provided in the Notes.

Commenting about the insurance group's interim financial statements Philipp Gmür, CEO of the Helvetia Group, said: "We can look back on a successful first half in 2017 during which we clearly improved on all the key figures compared to the prior-year period."

Earnings increase and net combined ratio improves once again
The Helvetia Group increased its underlying earnings after taxes in the first half of 2017 by 8.4% on the previous year to CHF 258.4 million. In addition to the improved technical results for both the non-life and the life business, the increase in earnings resulted primarily from a significantly improved investment result compared with the first half of 2016. The IFRS result of CHF 210.1 million, which is temporarily distorted by the accounting effects of the 2014 acquisitions, was up 12.9% on the prior-year period.

Improved technical result for non-life thanks to successful portfolio optimisation
Both the non-life business and the life business contributed to the good earnings trend. In the non-life business, Helvetia generated underlying earnings of CHF176.6 million, an increase of 16.9% on the first half of 2016. This increase is mainly due to an improved investment result and a better technical result, which was mainly boosted by successful portfolio optimisation measures and an improved claims experience. The net combined ratio improved from 91.9% in the previous year to its current 91.3%. In the Europe segment in particular, Helvetia substantially increased the profitability of the underwritten business: the net combined ratio improved significantly year on year from 97.2% to 94.4%. All market units reported combined ratios below 100% and operated profitably.

Solid result for life business despite a challenging environment
Underlying earnings for the life business amounted to CHF 92.2 million, up 4.2% on the first half of 2016. This increase was driven by a higher risk result with the risk experience returning to normal after the previous year and an improved savings result following a reduction in the minimum interest rate in the Swiss group life business. Higher expenses for policyholder participation as a result of the improved investment result, had a mitigating effect. In the reporting year also higher taxes arose, as one-off effects had had a positive impact in the previous year. The new business margin improved significantly in the first half of 2017 compared with the previous year and amounted to 1.2% (first half of 2016: 0.5%). The results confirm that profitability has been successfully improved.

Underlying earnings for the other activities business area stood at CHF -10.4 million in the first half of 2017 (first half of 2016: CHF -1.2 million). Group reinsurance's technical result improved thanks to good performance by the direct business. However, the previous year was affected by the positive impact of tax effects. And finally, Helvetia incurred slightly higher expenses for budgeted investments in strategic projects.

Business volume grows once again
In the first half of 2017, Helvetia generated a Group-wide business volume of CHF5,532.1 million (first half of 2016: CHF 5,544.3 million). In currency-adjusted terms, this was a rise of 0.3%. Expressed in Swiss francs, business volume contracted slightly by 0.2% because of negative exchange rate effects. In the non-life business, Helvetia posted satisfying currency-adjusted growth of 3.0%. Due to a positive one-off effect in the previous year in the Swiss group life business and the curtailment of the traditional individual life business in line with the strategy, the total volume for the life business was around 1.9% lower. On the other hand, the efforts to promote sales of modern life insurance products bore fruit, and the capital efficient non-traditional business reported very pleasing growth of 36.9%.

Europe and Specialty Markets segments post considerable growth
Broken down by segment, premium volume for Switzerland amounted to CHF3,567.9 million, which was down from the previous year (first half of 2016: CHF 3,676.9 million). This decline was caused by the life business, while the Swiss non-life business posted pleasing growth of 1.5%. Business volume for the Europe segment rose to CHF 1,456.8 million, up 4.3% in currency-adjusted terms on the prior year. This growth was driven by Austria and Spain, both of which posted growth in the life as well as the non-life business. Business volume rose slightly in Germany, but contracted in Italy. In Germany, the life business improved while the non-life business was affected by the last acquisition-related portfolio optimisation measures. Italy was faced by a market-wide contraction of the motor vehicle business, while the growth in modern life insurance products could not make up for the decline in traditional life business. Premium volume for the Specialty Markets segment rose by 13.8% to CHF 507.4 million in the first half of the year, primarily driven by the active reinsurance business.

Capital base and solvency remain solid
Helvetia still has a strong capital base. The SST ratio as at the end of 2016 was within the target range of 140% to 180%. Equity stabilised at CHF 4,806.1 million compared with CHF 4,812.6 million at the end of 2016. Return on equity was also pleasing: based on underlying earnings, return on equity increased from an annualised 9.4% in the first half of 2016 to 10.2% in the reporting period.

Integration activities on the home stretch
The integration of Nationale Suisse and Basler Austria, which were acquired in 2014, is almost completed. The success of this work is reflected in the synergies that have already been realised. The underlying earnings include realised pre-tax synergies of CHF 62.0 million (first half of 2016: CHF 51.4 million).

Strategy strengthens and expands core business and taps into new sources of income
Helvetia is making very good progress with the implementation of the helvetia 20.20 strategy unveiled in March 2016. The strategy follows a structured and focused implementation plan designed to further the development of the insurance group. Not only is the core insurance business being developed further in order to optimise the existing business and make it more efficient, but it is also being expanded in order to tap into additional sources of income. To round off these efforts, Helvetia has also adopted an innovation portfolio to develop new business models and renovate the existing business.

Helvetia can report its first successes for all three lines of strategy implementation. For example, the insurance group is developing its current business model through automation and a simplification of processes. As part of the expansion of the current business model, Helvetia is working on building up a "Home" ecosystem, through which it now has its first strong anchor following the acquisition of a majority stake in MoneyPark, the largest mortgage intermediary in Switzerland. To reinforce this MoneyPark acquired Defferrard & Lanz in July 2017. This merger supports the consistent implementation of the helvetia 20.20 strategy. Different approaches are being applied to the innovation portfolio. Besides corporate incubation and the Helvetia Venture Fund, Helvetia is also pursuing a prototyping approach. As part of this project, Helvetia successfully developed an SMS chatbot for automatic contract renewals in the first half of 2017. This makes Helvetia the first insurance company in Europe to conclude contracts via chatbot.

Philipp Gmür was pleased with the achievements in the first half: "The operating key figures are very good, and we can also be proud of the progress made with the helvetia 20.20 strategy. This strategy is making Helvetia more agile, innovative and customer-focused. It is also creating the conditions needed for fully exploiting the opportunities offered by digitalisation." 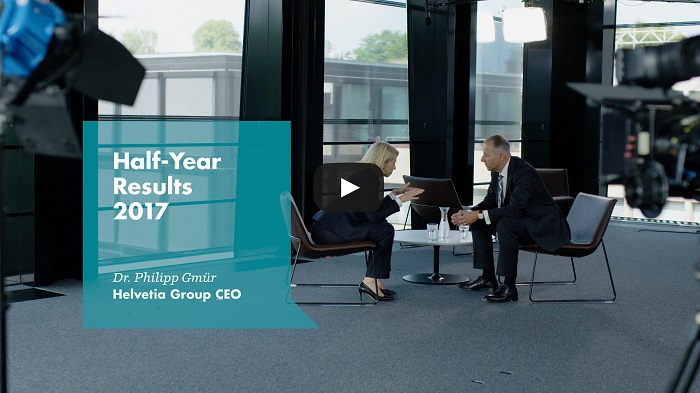