I am interested in
?
The “Search” function is not available at the moment, please try again later.
Please get in contact with us. To contact form
Jobs & career
EN
DE
Media release
Commitments & sponsorship

As well as sponsoring the Swiss Ski Association and various competitions, Helvetia has been committed to athletes from different disciplines – including as individual sponsor – for many years. Through personal sponsorship, Helvetia promotes the athlete’s sporting career and, as a dependable partner, is on hand to help these talented young individuals plan their future. Through a careful, continuous process of cooperation, a high-calibre international ski team has been formed including top athletes such as the three Olympic champions Dario Cologna, Simon Ammann and Sandro Viletta as well as a large number of aspiring talents.

Ahead of the 2017/2018 season, the Helvetia ski team has now been expanded to 46 athletes from five nations. 34 of the team’s members are from Switzerland. By expanding its international activities in the world of skiing, Helvetia strengthens its image as a dependable Swiss insurance company in its key markets abroad. The following athletes are new to the team:

Upcoming talents join Michelle Gisin in Switzerland
Alongside her brother Marc, the youngest of the three Gisin siblings now sports the Helvetia emblem on her helmet and hats. As an all-rounder in the Swiss national team, Michelle Gisin is guaranteed to come up with a surprise or two. Last winter saw the 24-year-old celebrate the biggest success of her career by picking up the silver medal in the Alpine Combined event at the World Ski Championships in St. Moritz.

Marco Odermatt from Beckenried, aged just 20, is a major young hopeful in the Swiss Alpine ski squad. He became Junior World Champion in the Giant Slalom at Sochi in 2016 and also picked up the bronze medal in the Super-G. This winter sees him compete as part of the B Team.

Gilles Roulin won the Overall title in the European Cup last winter at the age of 22. This winter he will now be competing in the World Cup. The Downhill and Super-G specialist grew up in Grüningen, canton of Zurich, and is a member of the Lenzerheide-Valbella ski club.

Also signing up with Helvetia are Gian Luca Barandun, Yannick Chabloz and Désirée Steiner. His third placing in the Overall title of the Super-G in the European Cup last winter enabled Gian Luca Barandun, 23, to secure himself a place in the World Cup races. At just 18 years of age, Yannik Chabloz is a highly promising talent in the technical disciplines. In addition, 17-year-old Désirée Steiner has the potential to continue the success of Laurien van der Graaff and Nathalie von Siebenthal in cross-country skiing.

Team now includes biathletes in Germany
Among the Alpine athletes, Stefan Luitz follows in the footsteps of Viktoria Rebensburg. Luitz, 25, is a Giant Slalom specialist who has won a World Cup podium finish four times so far and is placed 8th in the current rankings.

In the shape of Erik Weick and Helene Hendel, Helvetia has also signed up two upcoming biathlon talents in Germany. Erik Weick is 21 years old and has so far competed mainly in junior competitions. Helene Hendel is 22 and a member of the Oberhof ski club based in the Thuringian Forest. Biathlon is an extremely popular type of winter sport in Germany, providing Helvetia with an attractive platform for strengthening its brand image in the German market.

Partnership with commentator in Austria
Nicole "Niki" Hosp has now given up her successful career as an active athlete, but continues to enjoy huge popularity as a commentator with Austrian broadcaster ORF. She makes an excellent brand ambassador for Helvetia in the Austrian market and can look back on an exceptional string of successes in all Alpine disciplines. For instance, she claimed no fewer than twelve medals in the World Championships and Olympic Games.

Also joining the ski team is Dominik Baldauf, a member of the Austrian cross-country skiing team. The 25-year-old has so far excelled primarily as a sprint specialist.

Boost from Italy
Luca de Aliprandini now joins Marta Bassino in the ski team. The 27-year-old Giant Slalom specialist from the Dolomites currently stands at number 16 in this discipline in the Fis rankings.

Speed specialist from Spain
Barcelona’s Julia Bargallo is another new member of the team. The 22-year-old speed specialist competes in the Downhill, Super-G and Giant Slalom events. 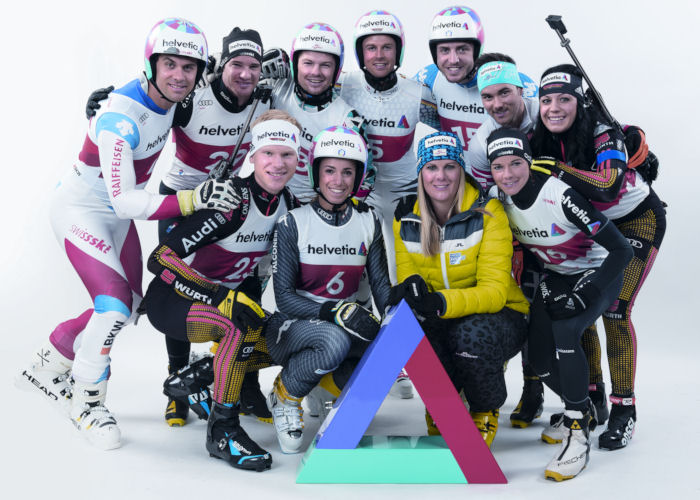 This media release is also available on our website www.helvetia.com/media.

In almost 160 years, the Helvetia Group has grown from a number of Swiss and foreign insurance companies into a successful international insurance group. Today, Helvetia has subsidiaries in its home market Switzerland as well as in the countries that make up the Europe market area: Germany, Italy, Austria and Spain. With its Specialty Markets market area, Helvetia is also present in France and in selected regions worldwide. Some of its investment and financing activities are managed through subsidiaries and fund companies in Luxembourg and Jersey. The Group is headquartered in St.Gallen, Switzerland.
Helvetia is active in the life and non-life business, and also offers customised specialty lines and reinsurance cover. Its business activities focus on retail customers as well as small and medium-sized companies and larger corporates. With some 6,500 employees, the company provides services to more than 5 million customers. With a business volume of CHF 8.51 billion, Helvetia generated underlying earnings of CHF 491.8 million in the 2016 financial year. The registered shares of Helvetia Holding are traded on the SIX Swiss Exchange under the symbol HELN.

This document was prepared by Helvetia Group and may not be copied, altered, offered, sold or otherwise distributed to any other person by any recipient without the consent of Helvetia Group. The German version of this document is decisive and binding. Versions of the document in other languages are made available purely for information purposes. Although all reasonable effort has been made to ensure that the facts stated herein are correct and the opinions contained herein are fair and reasonable, where any information and statistics are quoted from any external source such information or statistics should not be interpreted as having been adopted or endorsed as accurate by Helvetia Group. Neither Helvetia Group nor any of its directors, officers, employees and advisors nor any other person shall have any liability whatsoever for loss howsoever arising, directly or indirectly, from any use of this information. The facts and information contained in this document are as up to date as is reasonably possible but may be subject to revision in the future. Neither Helvetia Group nor any of its directors, officers, employees or advisors nor any other person makes any representation or warranty, express or implied, as to the accuracy or completeness of the information contained in this document.
This document may contain projections or other forward-looking statements related to Helvetia Group which by their very nature involve inherent risks and uncertainties, both general and specific, and there is a risk that predictions, forecasts, projections and other outcomes described or implied in forward-looking statements will not be achieved. We caution you that a number of important factors could cause results to differ materially from the plans, objectives, expectations, estimates and intentions expressed in such forward-looking statements. These factors include: (1) changes in general economic conditions, in particular in the markets in which we operate; (2) the performance of financial markets; (3) changes in interest rates; (4) changes in currency exchange rates; (5) changes in laws and regulations, including accounting policies or practices; (6) risks associated with implementing our business strategies; (7) the frequency, magnitude and general development of insured events; (8) mortality and morbidity rates; (9) policy renewal and lapse rates as well as (10), the realisation of economies of scale as well as synergies. We caution you that the foregoing list of important factors is not exhaustive; when evaluating forward-looking statements, you should carefully consider the foregoing factors and other uncertainties. All forward-looking statements are based on information available to Helvetia Group on the date of its publication and Helvetia Group assumes no obligation to update such statements unless otherwise required by applicable law.