Helvetia increases its growth and earnings, benefits from Caser takeover and makes a successful start to the helvetia 20.25 strategy period

The most important details about the 2021 interim financial statements at a glance:

Acquisition of the Spanish insurance company Caser pays off

Summer storms show that Helvetia is there when it matters

Dynamic start to the implementation of the helvetia 20.25 strategy

"Helvetia can look back on a good first half of the year. The contribution made by Caser to the interim financial statements shows that the Spanish insurance company that we acquired in 2020 is delivering on what we promised. Helvetia has likewise performed strongly at an organic level. We also benefited from good capital market developments as well as solid technical results in the first half of 2021. We are pleased about the broad-based growth and robust earnings", explains Philipp Gmür, Group CEO of Helvetia, with respect to the 2021 interim financial statements.

The IFRS result after tax increased in the first half of 2021 to CHF 262.4 million (first half of 2020: CHF -16.9 million). Stronger investment results, which benefited from the strong equity market performance in the first half of 2021, were a key driver of this improvement. The purchase of Caser paid off: the Spanish insurance company, which was acquired in mid-2020, made a contribution of CHF 32.1 million to the interim financial statements.

Solid combined ratio
The net combined ratio in the non-life business in the first half of 2021 was 94.5 percent (first half of 2020: 95.9 percent). Compared to the previous year, the absence of COVID-19 claims had a positive impact. The Swiss business also recorded a one-off special effect. This can be attributed to a periodic review of the reserve level, on the basis of which reserves were released. On the other hand, the storms in June 2021 gave rise to an increased claims burden from natural catastrophes, primarily in Switzerland.

Improved new business margin in the life business
In the life business, the new business margin improved relative to the prior-year period by 0.3 percentage points to 3.0 percent (first half of 2020: 2.8 percent) and thus stood at the upper end of the strategic target range of 2 to 3 percent. This increase can primarily be attributed to product adjustments, improved cost assumptions and higher investment returns.

Strong growth of 21 percent thanks to Caser – as well as a strong organic performance
In the first half of 2021, Helvetia continued its focussed growth strategy. The business volume amounted to CHF 6,940.6 million (first half of 2020: CHF 5,657.0 million). On a currency-adjusted basis, this represents an increase of 21.0%. A considerable part of this growth can be attributed to Caser, which is being included in the income statement of the interim financial statements for the first time. At an organic level, Helvetia generated pleasing growth of 5.2 percent in original currency during the first half of 2021.

The non-life business, which posted growth of 31.5 percent in original currency, was a strong growth driver. In addition to the contribution of Caser, which was responsible for around two-thirds of the growth, successful organic growth was also observed here. This was broad-based across all segments and country markets. In Switzerland, the growth of the B2B2C business and the online insurer Smile is particularly notable.

Life insurance also increased its business volume by 8.7 percent in original currency. In addition to the contribution of Caser, the business with capital-efficient investment-linked insurance products in the individual life business also performed very well. Helvetia generated considerable growth rates with these products in all country markets.

Income from the fee business contributed CHF 165.8 million and grew considerably thanks to Caser and its non-insurance activities.

Investment result benefits from strong equity market performance
Current income from investments remained stable relative to the prior year at CHF 461.4 million (first half of 2020: CHF 457.3 million) due to the additional income from the portfolio of the acquired Spanish insurance company Caser. The direct yield declined slightly to 0.8 percent (first half of 2020: 0.9%, neither figure annualised) due to the lower yield generated by the acquired Caser portfolio owing to acquisition effects. The overall investment result of the Group increased to 872.3 million (first half of 2020: CHF 92.4 million), primarily thanks to book profits stemming from the strong equity market performance.

Consistently solid capitalisation
Helvetia's capital position remains strong. Helvetia estimates that its SST ratio at the end of June 2021 stood at above 220 percent (end of 2020: 193 percent). Here too, Helvetia benefited from the positive capital market performance in the first half of 2021.

Successful start to strategy implementation
Helvetia presented its new helvetia 20.25 strategy at the start of the year. With this strategy, Helvetia wants to become the best partner for financial security and to set standards in the areas of customer convenience and customer access. The new strategy period has got off to a successful start. The investments in customer convenience are increasingly paying off, as can be seen, for example, in the fact that agency sales and B2B2C channels grew strongly and Smile increased its growth to around 12 per cent compared to the previous year.

In Italy, Helvetia further expanded its bank sales, with CiviBank, the digital distribution platform YOLO and Helvetia agreeing to develop a simple digital insurance offering. A partnership with illimity, a digital bank listed on the Italian stock exchange, has already existed for some time. During the first half of the year, illimity and Helvetia added a fully digital life insurance product to their offering.

In Spain, Helvetia further extended the "Health & Care" ecosystem. With the acquisition of a further clinic for Grupo Hospitales Parque, a subsidiary company of Caser, this ecosystem now brings together six hospitals, 22 nursing homes as well as 22 dental clinics.

"We have already been able to record initial successes in the implementation of our strategy during the first half of the year. We now want to take this momentum with us and work vigorously to develop Helvetia into a European financial services provider for insurance and pension provision", says Philipp Gmür with respect to the implementation of the helvetia 20.25 strategy. 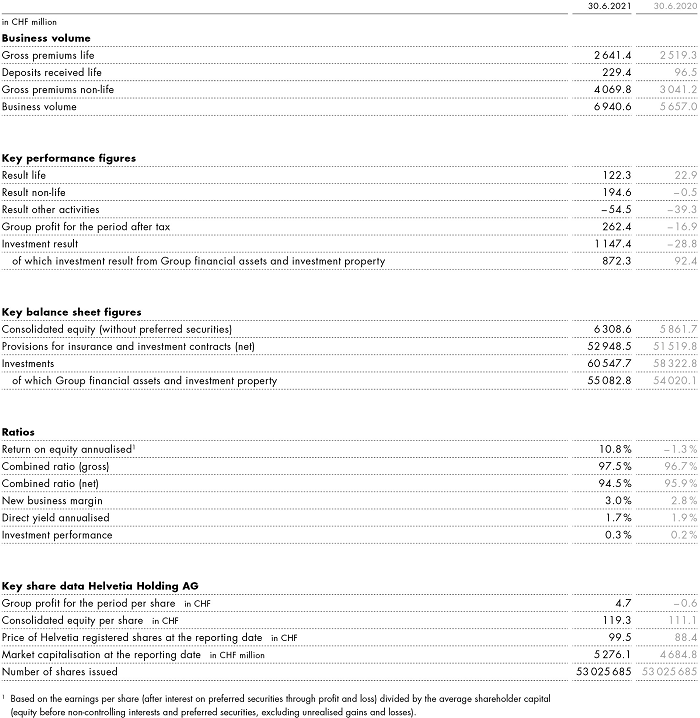 In over 160 years, the Helvetia Group has grown from a number of Swiss and foreign insurance companies into a successful international insurance group. Helvetia is one of the leading all-line insurers in its home market of Switzerland. With the countries Germany, Italy, Austria and Spain, which have been combined to form the Market Area Europe, the company has a second strong pillar. With its Specialty Markets market area, Helvetia is also present in France and in selected regions worldwide. Some of its investment and financing activities are managed through subsidiaries and fund companies in Luxembourg. The Group is headquartered in St.Gallen, Switzerland.
Helvetia is active in the life and non-life business, and also offers customised specialty lines and reinsurance cover. Its business activities focus on retail customers as well as small and medium-sized companies and larger corporates. With some 11,600 employees, the company provides services to more than 7 million customers. With a business volume of CHF 9.71 billion, Helvetia generated an IFRS result after tax of CHF 281.7 million in financial year 2020. The registered shares of Helvetia Holding are traded on the SIX Swiss Exchange under the symbol HELN.

This document was prepared by Helvetia Group and may not be copied, altered, offered, sold or otherwise distributed to any other person by any recipient without the consent of Helvetia Group. The German version of this document is decisive and binding. Versions of the document in other languages are made available purely for information purposes. Although all reasonable effort has been made to ensure that the facts stated herein are correct and the opinions contained herein are fair and reasonable, where any information and statistics are quoted from any external source such information or statistics should not be interpreted as having been adopted or endorsed as accurate by Helvetia Group. Neither Helvetia Group nor any of its directors, officers, employees and advisors nor any other person shall have any liability whatsoever for loss howsoever arising, directly or indirectly, from any use of this information. The facts and information contained in this document are as up to date as is reasonably possible but may be subject to revision in the future. Neither Helvetia Group nor any of its directors, officers, employees or advisors nor any other person makes any representation or warranty, express or implied, as to the accuracy or completeness of the information contained in this document.
This document may contain projections or other forward-looking statements related to Helvetia Group which by their very nature involve inherent risks and uncertainties, both general and specific, and there is a risk that predictions, forecasts, projections and other outcomes described or implied in forward-looking statements will not be achieved. We caution you that a number of important factors could cause results to differ materially from the plans, objectives, expectations, estimates and intentions expressed in such forward-looking statements. These factors include: (1) changes in general economic conditions, in particular in the markets in which we operate; (2) the performance of financial markets; (3) changes in interest rates; (4) changes in currency exchange rates; (5) changes in laws and regulations, including accounting policies or practices; (6) risks associated with implementing our business strategies; (7) the frequency, magnitude and general development of insured events; (8) mortality and morbidity rates; (9) policy renewal and lapse rates as well as (10), the realisation of economies of scale as well as synergies. We caution you that the foregoing list of important factors is not exhaustive; when evaluating forward-looking statements, you should carefully consider the foregoing factors and other uncertainties. All forward-looking statements are based on information available to Helvetia Group on the date of its publication and Helvetia Group assumes no obligation to update such statements unless otherwise required by applicable law.
Recommend this page