I am interested in
?
The “Search” function is not available at the moment, please try again later.
Please get in contact with us. To contact form
Portal Home
Personal data
Personal data
Logout
Login Customer portal
Login BVGonline
Login ImmoWorld
Report a claim
About us
Working for Helvetia
Find an agency
EN
DE
FR
IT
Media releases
Commitments & sponsorship
Art

Thanks to the support of Helvetia Insurance, these 15th and 16th-century documents can now be stabilised and made accessible to the public in exhibitions or online.
20.05.2021
Five Arabo-Persian manuscripts dating from the 15th and 16th centuries will be restored and digitised by the Martin Bodmer Foundation. As with all the other texts in the collection bequeathed by Martin Bodmer, these manuscripts are part of UNESCO’s "Memory of the World" register. Due to the tears, holes, stains and various other types of damage that the manuscripts have suffered, some of which were caused by previous attempts at repair, they were previously considered too fragile for any kind of handling, which rendered them completely off-limits to research, display or attempts at digitisation. Thanks to the support of Helvetia Insurance, this three-year conservation-restoration and digitisation project will make it possible to stabilise the manuscripts so that they can be displayed in exhibitions, while digitisation will make them accessible to the public, researchers, bibliophiles and academics once again via the Internet.

In a statement, the Board of Directors of the Martin Bodmer Foundation said: "The Martin Bodmer Foundation is the custodian of a UNESCO-listed collection, and we are fully committed to ensuring its preservation and accessibility for both researchers and the general public. Sponsors such as Helvetia Insurance are crucial in allowing us to push forward with our mission and in ensuring that this 'Memory of the World' endures and can be studied and admired in the best possible conditions."

In the words of Olga Britschgi, an art historian who is also Helvetia’s insurance underwriter for works of art in French-speaking Switzerland: "This project makes it possible to save, restore, and digitise exceptional pieces of art, making them accessible to all. This helps to address Helvetia’s own concerns as an art insurer, namely that works of art are conserved while at the same time being made available in virtual form for research and for viewing pleasure."

The conservation-restoration project will be carried out by Sandra Vez, the Foundation's restorer, in the institution’s recently unveiled workshop. The Martin Bodmer Foundation has extensive experience in the field of digitisation and has been involved for years in many different projects developed in partnership with very prestigious Swiss institutions. The corpus will be digitised by specialist Naomi Wenger in the Foundation’s own photography workshop, using one of the best digitisation machines available.

The five manuscripts in the project 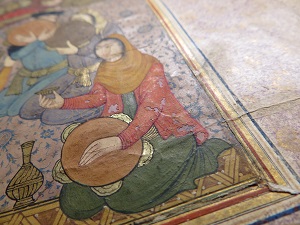 This media release is also available on our website www.helvetia.ch/media.

About the Martin Bodmer Foundation

Preserving and promoting a UNESCO "Memory of the World" collection

Created in 1971, the Martin Bodmer Foundation is a library and museum that houses and exhibits the greatest texts in world literature and human history. This unique place collates and displays important works that bear witness to human thought from the origins of writing to the present day.

The Foundation houses some 150,000 documents in nearly 120 languages, making it one of the best private collections in the world. It includes hundreds of papyri, Western and Eastern medieval manuscripts and thousands of pages of autographs and rare prints. The collection includes one of the 48 extant copies of the first edition of the Gutenberg Bible, the oldest complete version of a gospel (the Gospel of St. John), first edition works by Shakespeare, Molière and Lope de Vega, more than 300 medieval and oriental manuscripts, scrolls from the Egyptian Book of the Dead, Luther’s Theses, and documents signed by Mozart, Beethoven, Napoleon, Borges and many others. Since 2015, this Biblioteca Bodmeriana has been one of the Swiss literary collections to be listed as part of  UNESCO’s "Memory of the World" programme, an initiative created with the goal of preserving and sharing the planet’s literary heritage.

The main objective of the Foundation is to preserve the valuable works included in its UNESCO-listed collection and to make them accessible to the general public. The Martin Bodmer Foundation is involved in various conservation-restoration and digitisation projects with a view to making documents available online. Since 2003, it has been welcoming visitors to its modern underground museum designed by the great Swiss architect Mario Botta and situated on the unrivalled Cologny hill, with a breathtaking view overlooking both the city of Geneva and the lake of the same name. In addition to its permanent exhibition, the Martin Bodmer Foundation organises temporary exhibits and cultural mediation activities on topics related to science, art, history and literature, giving the public access to these authentic treasures that have left their mark on human history.

In over 160 years, the Helvetia Group has grown from a number of Swiss and foreign insurance companies into a successful international insurance group. Helvetia is one of the leading all-line insurers in its home market of Switzerland. With the countries Germany, Italy, Austria and Spain, which have been combined to form the Market Area Europe, the company has a second strong pillar. With its Specialty Markets market area, Helvetia is also present in France and in selected regions worldwide. Some of its investment and financing activities are managed through subsidiaries and fund companies in Luxembourg. The Group is headquartered in St.Gallen, Switzerland.

Helvetia is active in the life and non-life business, and also offers customised specialty lines and reinsurance cover. Its business activities focus on retail customers as well as small and medium-sized companies and larger corporates. With some 11,600 employees, the company provides services to more than 7 million customers. With a business volume of CHF 9.71 billion, Helvetia generated an IFRS result after tax of CHF 281.7 million in financial year 2020. The registered shares of Helvetia Holding are traded on the SIX Swiss Exchange under the symbol HELN.

This document was prepared by Helvetia Group and may not be copied, altered, offered, sold or otherwise distributed to any other person by any recipient without the consent of Helvetia Group. The German version of this document is decisive and binding. Versions of the document in other languages are made available purely for information purposes. Although all reasonable effort has been made to ensure that the facts stated herein are correct and the opinions contained herein are fair and reasonable, where any information and statistics are quoted from any external source such information or statistics should not be interpreted as having been adopted or endorsed as accurate by Helvetia Group. Neither Helvetia Group nor any of its directors, officers, employees and advisors nor any other person shall have any liability whatsoever for loss howsoever arising, directly or indirectly, from any use of this information. The facts and information contained in this document are as up to date as is reasonably possible but may be subject to revision in the future. Neither Helvetia Group nor any of its directors, officers, employees or advisors nor any other person makes any representation or warranty, express or implied, as to the accuracy or completeness of the information contained in this document.

This document may contain projections or other forward-looking statements related to Helvetia Group which by their very nature involve inherent risks and uncertainties, both general and specific, and there is a risk that predictions, forecasts, projections and other outcomes described or implied in forward-looking statements will not be achieved. We caution you that a number of important factors could cause results to differ materially from the plans, objectives, expectations, estimates and intentions expressed in such forward-looking statements. These factors include: (1) changes in general economic conditions, in particular in the markets in which we operate; (2) the performance of financial markets; (3) changes in interest rates; (4) changes in currency exchange rates; (5) changes in laws and regulations, including accounting policies or practices; (6) risks associated with implementing our business strategies; (7) the frequency, magnitude and general development of insured events; (8) mortality and morbidity rates; (9) policy renewal and lapse rates as well as (10), the realisation of economies of scale as well as synergies. We caution you that the foregoing list of important factors is not exhaustive; when evaluating forward-looking statements, you should carefully consider the foregoing factors and other uncertainties. All forward-looking statements are based on information available to Helvetia Group on the date of its publication and Helvetia Group assumes no obligation to update such statements unless otherwise required by applicable law.